In memory of Hugh C. Morris 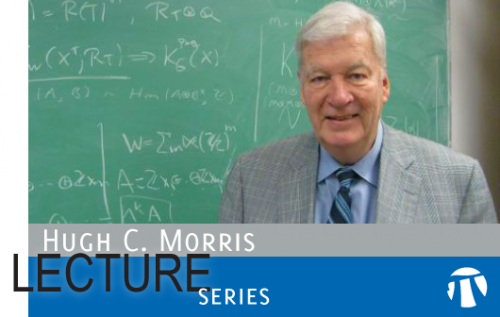 “It is with great sadness that I write to inform you that in the early morning of December 23, my beloved father, and a man whom I know you knew very well, passed away.”  That was Sue informing me yesterday of the passing of her dad, Hugh Morris, the business leader, the mining executive, and the philanthropist. And yes, Hugh Morris also happened to be my mentor and my friend, an unlikely state of affairs for an academic/mathematician who has nothing to do with industry, with mining of any kind, or with philanthropy.

The news brought with it extreme sadness, but also a sense of bewilderment as to the amazing twists, turns, and unlikely encounters that life sometimes reserves for us. Hugh C. Morris was a leader in Canada’s mineral industry, yet here is his daughter relaying to me his passing, while singling out issues of “leadership for mathematics in Canada and internationally.”  Well, here is the story behind this story that is making my Christmas so emotionally charged.

Hugh C. Morris received his PhD in Mining Geology from the University of the Witwatersrand, in Johannesburg, South Africa. He spent the first 18 out of his 50 years experience in the mineral industry with Cominco Ltd., becoming Director of Exploration. From 1983 to 1993 he was Chairman and CEO of Imperial Metals Corporation, a Canadian company mining gold, copper and uranium. He was Chairman of the Board of Eldorado Gold Corporation, a Canadian gold company with operations in Brazil and Turkey; and a director of Pacific Northern Gas Ltd., Diamondex Resources Ltd., and Eureka Resources Inc.

So, what’s math got to do with all this?

I remember vividly the message of Barry McBride, who was then Dean of Science at UBC. “Come over to my reception honoring the new UBC inductees to the Royal Society of Canada. I want you to meet someone who may be exactly the person you’re looking for,” said Barry.

I was then desperately searching for a Chair of the Board of the –then nascent– Pacific Institute for the Mathematical Sciences. PIMS was still barely an idea then, a good one though, but it had no serious funding, no national status, and hardly any buy-in from the universities or the community-at-large.

Ed Perkins came along to the reception and we were both instantly impressed, by the speech Hugh gave then, and by the kindness he showed. I mentioned timidly our plans for an institute, awkwardly soliciting his help. He must have been a great friend of McBride, since he didn’t dismiss the idea outright and proceeded to suggest that we discuss it over lunch sometime in the next few weeks.

The rest is history. Hugh chaired the Board of PIMS during all my tenure as director from 1997 till 2003 and beyond. Under his guidance, PIMS grew to become a major national institution coordinating activities in all major universities in BC, Alberta as well as the University of Washington.

Hugh supported us when in 1998 PIMS, the Fields Institute and the Centre de recherche mathematiques partnered in the development of the MITACS Network of Centres of Excellence. And guess who did Steve Halperin, Luc Vinet and Don Dawson eye for the Chairmanship of the very first MITACS Board of Directors? Yes, it was Hugh Morris, who was by that time too close of a friend to decline our offer.

In 2000, PIMS and the Berkeley-based Mathematical Science Research Institute (MSRI) collaborated on the creation of the Banff International Research Station (BIRS). Shortly after that, the MSRI director, David Eisenbud, couldn’t resist falling into the –by then predictable– pattern of asking Hugh to be on the Board of Directors of MSRI. Again, Hugh graciously accepted.

No one could resist Hugh’s dashing charm, his commitment to the tasks he undertakes, his dedication to service and community. And Hugh couldn’t resist saying yes to any call for duty.

Indeed, Hugh has also participated extensively in many other scientific and professional activities. He is a Fellow of the Royal Society of Canada and from 1994 to 1999 was Chairman of the Canadian Global Change Program, a program of the RSC. He is a member of the Geological Association of Canada (President in 1983), the Geological Society of America, and the Canadian Institute of Mining and Metallurgy.

He has been on a number of Canadian Government committees and was a member of the Natural Sciences and Engineering Research Council of Canada. He served as Chairman of the Board of the Lithoprobe project, Canada’s nationwide deep seismic investigation for many years before joining us at PIMS.

“My father often spoke to me about how much he valued your friendship”, wrote Sue. I really hope Hugh passed knowing how much his friendship, his leadership and his contributions were appreciated by not only me but also by many generations of researchers and scholars.

1 Response to In memory of Hugh C. Morris