“Stock options” in the business of building research capacity

A highlight of my latest visit to Ottawa was a reunion with my friends and former brothers-in-arms, Don Dawson and Luc Vinet, at the Queen Elizabeth II Diamond Jubilee Medal Ceremony. Our role in founding the MITACS network back in another millennium (1998), was obviously the main reason for us being there. I hadn’t seen Don and Luc for a while but wasn’t surprised to learn how neither the years nor the heavy responsibilities had managed to slow them down in their drive and in their research. More than 10 years after “his retirement”, Don’s research and graduate training programs are still going full blast. As for Luc, he was back doing research with a vengeance after having completed his term as Recteur of the Université de Montréal, following a 5-year stint as Provost at McGill. What a humbling experience it is to have to compare notes with these guys.

We marveled at the success story that MITACS has become. And not unlike certain early Google investors, we talked half-jokingly about how we should have held on to some MITACS “stock options”. We then remarked that we actually had. After all, we were here mostly cashing in on our early investment in this amazing Canadian success story.

Don, Luc, Steve (Halperin) and I had launched MITACS (“Mathematics of Information Technology and Complex Systems”) more than 15 years ago, as a Network of Centres of Excellence for the mathematical sciences. Unfortunately, Steve was not with us in Ottawa. We opined that the system may have “punished” him for the fact that he has been living outside Canada for more than a decade now.

Back in 1998, Mathematics was still perceived as an “esoteric” discipline reserved for the few nerds among us. That was before the IT boom, the rise and fall and the resurrection of “financial engineers,” (aka mathematicians), the “revenge of the nerds” and all that. Colleagues were stunned by our success in the NCE competition, which used to be the monopoly of those who wanted to cure cancer, deal with arthritis and clean our air and water.

The original mandate of MITACS was to support research in the mathematical sciences, with a focus on their applications to five key sectors of the Canadian economy: Biomedical & Health, Environment & Natural Resources, Information Processing, Risk & Finance, and Communication, Networks & Security. In 2000, Arvind Gupta took over as scientific director and within few short years, he transformed the network into an R&D powerhouse that transcends the mathematical sciences.

MITACS (now Mitacs Inc.) changed the way we look at and deal with knowledge transfer. Today’s Mitacs Inc. is a major enterprise with a budget of over $50M per year. It is an incredible operation that delivers innovative academic-industrial programs in partnership with the federal government, with every one of Canada’s ten provinces, as well as with 58 of Canada’s research focused universities. And more recently, Mitacs has initiated Globalink, an international initiative that connects the talents in Canadian academic institutions with those in India, Brazil, China and Mexico.

In 1998, no politician showed up to the launch of MITACS at the Asian centre at UBC. Last Wednesday, no less than four federal cabinet ministers went to the podium during the Mitacs students’ award reception that followed the Diamond Jubilee ceremony. Another dozen MPs from various political parties mingled in the crowd. A reception, where a recently elected young MP told me that “she is hoping that in the next elections, her party leader will run as the candidate of science and technology … just like Obama!” 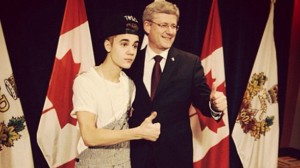 Don, Luc, Steve and I had nothing to do with this most intriguing aspect of the current Mitacs success story. This is all Arvind’s story. Our role was simply to be exhausted by watching it unfold from the stands. And boy, what a difference 15-years make when a community is blessed with exceptional leadership. The banking world may be going on about Mark Carney and how he is Canada’s biggest export since Justin Bieber, but Canadian scientists, science policy makers, and leaders of higher education surely have their own treasures to cherish and other defections to worry about.