Blame it on BIRS! 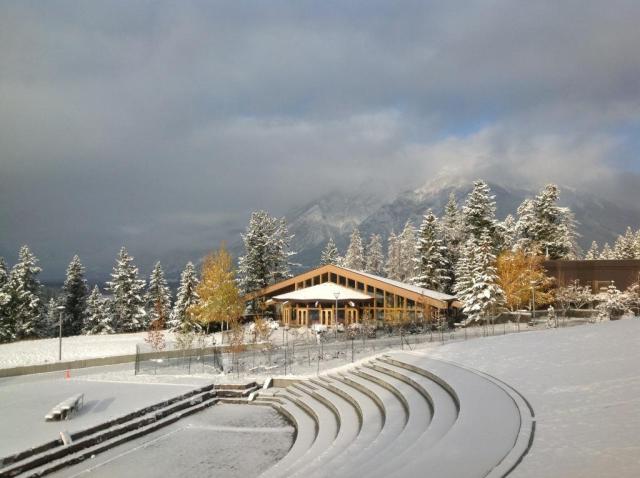 Where have you been? How come you haven’t been blogging lately, wrote a “Piece of Mind” loyalist. Why weren’t you at the PDE seminar, a colleague inquired. “On attend ton papier avec impatience,” wrote the editor of a special volume three weeks after I missed the deadline. “If more time elapses it becomes difficult for me to take a negative decision, in case you eventually tell me that the paper does not deserve to be published,” pleaded the editor-in-chief of a respectable journal. The only person who seems to be relieved by my MIA status is my son, who is not missing my “oppressive” supervision of his daily intake of high school math and physics. Blame it on BIRS! Yes, it is crunch time at the Banff International Research Station for Mathematical Innovation and Discovery. This year’s competition for the 2014 program received 168 proposals submitted by 382 applicants. The selection process involved 800 evaluations by 412 international peer reviewers. Now that we are done for this year, it is good to describe the story behind the story of BIRS.

It is a fact that BIRS has been a success story for Canadian science. Since its inception almost 10 years ago, the number of proposals submitted to BIRS went from 79 in 2003 (its inaugural year) to 168 for the 2014 program (which was adjudicated this year). The extraordinary reaction to the opportunities at BIRS has led to extremely high quality competitions for the 48 slots that the Station runs every year (one workshop per week). Hundreds of scientists from all over the world participate in the peer review process. 800 reports (about 5 per proposal) were contributed this year, which greatly helps the BIRS scientific panel in its decision making. Crunch time came this past week-end, when ten panelists met, deliberated for long hours, and selected 44 proposals for full workshops  (each hosting up to 42 researchers) and 8 proposals for half-workshops (i.e., two of them will run in parallel during the same week, each hosting up to 22 researchers).

This year’s proposals were catalogued in the following 31 categories:

At the meeting, the committee first reviews each category, linearly ranking the proposals within it. Proposals are then selected by taking the top one or two in each category. In this way –and so long as there are first-rate proposals in each area– a distribution across the mathematical sciences and their applications is maintained. The BIRS Program Committee ranks proposals by scientific excellence and relevance alone, without regard for the geographical origin of the proposal. The commitment of the organizers is also a key criterion in the selection process. In return, the limited number of allowed participants forces the organizers to continue adhering to the highest standards. And here are a few numbers  describing the level of world-wide participation in BIRS activities.

The world’s scientific community owes a great deal to the ~30 members of the BIRS Scientific Advisory Board who have done a tremendous job reviewing the proposals in their own area of expertise and inputing their comments online. But the greatest deal of gratitude is owed to the 10 members of the Program Committee who read all 168 proposals, dissected all 800 reviews by peers, and who had to meet in person on a week-end away from home and family,  and deliberate for long hours in order to make the final selection in a very competitive year.

Here is more data on the lead organizers of the 2011 program.

Last but not least, I should tell you something about the time slots allocation. As you may expect, organizers have their preferences for when they would like to run their workshops. So, we ask them to submit their 5 top preferences as well as their “impossible dates”. Once the workshop selection is made, we feed their time preferences into a Monte-Carlo based  computer program, which tries to maximize the number of favorable assignments. After running 10-million iterations for most of last night, we were happy to see that 82.69% of this year’s proposals will have at least one of their 5 preferred choices: 14 will get their first choice, 6 will get their second, 10 their third, 9 their fourth, 4 their fifth. Unfortunately, 9 will have to take a time slot, which does not correspond to their stated preferences. An unescapable fact of life for which I apologize in advance.

4 Responses to Blame it on BIRS!