Everything you wanted to know about GERD, BERD, GovERD and HERD

The UK department for Business Innovation and Skills (BIS) released its annual science, engineering and technology statistics, including a good deal of data on how much the G7 countries spend on research and development (R&D). Canada is fifth out of seven in the most important overall indicator, the gross domestic expenditure on R&D (GERD), which consists of the sum of all annual investments on R&D in business, university, government and not-for-profit sectors.  But the picture becomes clearer when the numbers are broken down into the various contributing sectors to R&D. And one of them is surely a shocker.

The first table describes the evolution of the GERD from 1986 till 2009. The UK record is so lousy that it allows Canada to brag about moving from sixth to fifth place, even though  our numbers had also declined since 2004. 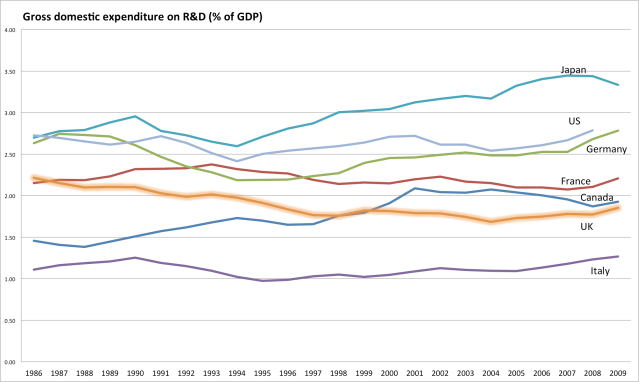 The next three tables break the GERD numbers down into the various contributing sectors to R&D, starting with the business enterprise expenditure on R&D (BERD), which confirms what everyone knows about Canada’s sorry state in this domain. 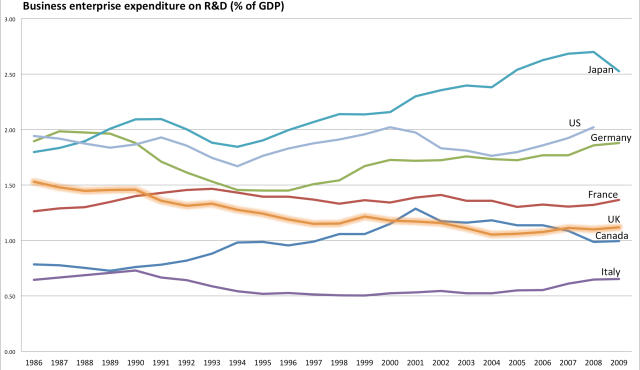 Note how business spending on R&D has declined relative to GDP in the last five years. And it doesn’t look like the government had stepped up to fill the hole left by business, since Canada comes again fifth among G7 nations in terms of government expenditure on R&D (GvERD). 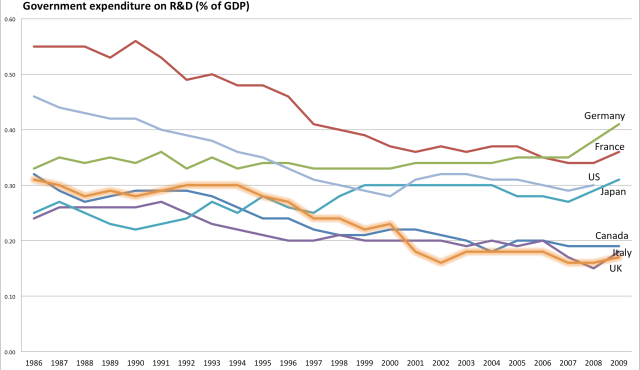 These numbers cannot include the $3.5-billion SRED program, which does not qualify as direct government funding, since the latter is only a tax incentive program.  On the other hand, it includes the NRC and the myriad of programs described here and recently reviewed by the Jenkins panel, minus those programs that go through the Tri-Council. These are accounted for in the following table for Higher-education expenditure on R&D (HERD): 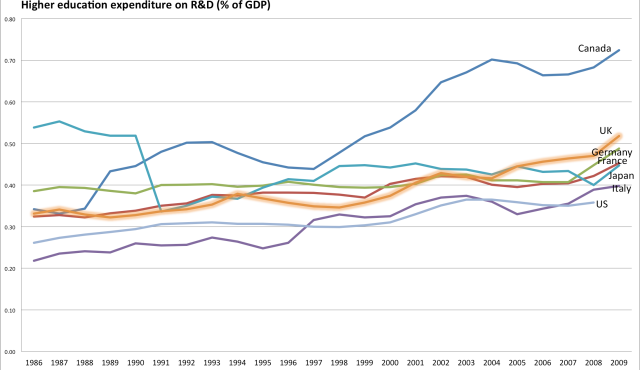 Here the numbers for Canada are astonishing. Besides the federal funding though the Tri-Council and CFI, the numbers seem to include all provincial and federal funding for post-secondary education (with faculty salaries and all). I am told that these figures are not well accepted by the AUCC and university administrations. One also wonders, whether the $2-billion of the Knowledge Infrastructure Program is what accounts for the sharp increase in the post-recession period. This is also questionable accounting.

4 Responses to Everything you wanted to know about GERD, BERD, GovERD and HERD