Higgs Boson not confirmed yet, but Mathematics of salt is

Jonathan Borwein just sent me these priceless photos of the Halaman Ferguson structure “under construction”. 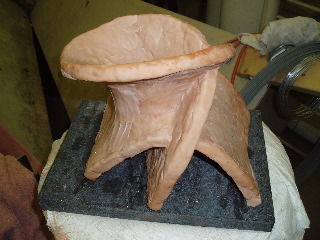 He writes: Your summary (actually it was Keith’s)  is entirely accurate. I suggested the object to Helaman as it wonderfully captured his passion for negative curvature with geometry, number theory and math physics while making a neat connection with summability.

It was fascinating watching the evolution of the idea through math (Helaman has worked on related things and we exchanged Maple and Mathematica worksheets) through mockups, plaster and wire frames to the final bronze (as per the attached). In theory we are writing an article called The mathematics of salt on the sculpture. 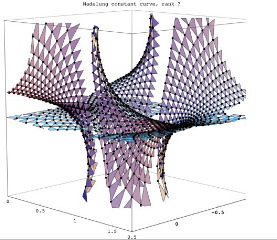 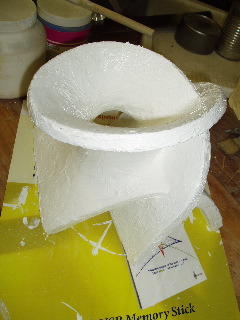 I recall Keith lecturing on the subject at StFX after we finished the paper — and being asked what to teach on Monday given all the texts gave a diverging series as the answer!

I continue to be fascinated by the subject. I append an article to come out in the Notices which has some discussion of Madelung’s constant and the prize.

My quote page has a fascinating excerpt from a recent book on Max Born who was Olivia Newton- John’s maternal  grandfather. Her father Newton- John was an early VC here in Newcastle. He was a German scholar  and spent WW1 in Germany as a spy posing as a German!